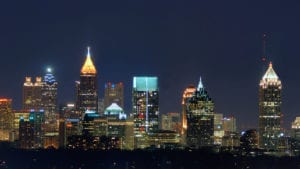 Atlanta is the the biggest city in the Peach state. It is one of the busiest places in the South. It is a huge city with many things to do. From the downtown area, you can see all of Atlanta’s skyscrapers and tourist destinations. Centennial Olympic Park contains the World of Coca-Cola museum, Georgia Aquarium, CNN Center, and other attractions. It is also home to Stone Mountain Park where you can find nature trails and waterfalls. Atlanta also is home to many sports teams to watch. They feature franchises from most of the major professional sports leagues in the United States. It may not be easy to watch your favorite sports team because of the geo-restrictions put in place. Learn how to stream Atlanta sports live around the world with a VPN.

How to Connect to a VPN Server in Atlanta

The Best of Atlanta Sports

Atlanta has been home to a professional team for baseball, basketball, football, soccer, and hockey over the years. While not all of these stayed in the city, Atlanta has created some of the biggest franchises. The city has hosted all types of international, college, and professional events. They have a large variety of places where sports are played, but two of the biggest are Truist Park and Mercedes Benz Stadium.

Atlanta is home to some great sports teams like:

The Falcons have been one of the most popular teams in the NFL. They joined the league in 1965 and have appeared in multiple Super Bowls. The Dirty Birds currently are members of NFC South division. They have done very well winning multiple championships in the division. Atlanta is well known for being a tough group. In the 1977, they were called the Gritz Blitz because they set a record for the fewest points scored against them.

The Braves have been one of the most successful franchises based out of Atlanta. They moved to the city in 1966. From 1995 to 2005, they won the Eastern Division title. America’s Team won their third World Series Title in 1995. it was the first time while in Atlanta. The Bravos have competed in more than 20000 games over the years.

The Hawks originally started in 1946. The franchise has moved multiple times. Their main colors are red and yellow. Meanwhile, the Hawks earned their first NBA Championship in 1958. The team would move ten years later to Atlanta. They won their first Division title their first year in the city. The Hawks play all of their home games at State Farm Arena.

Atlanta United is a team in Major League Soccer. They played their first season in the league in 2017. They play their home games at the same stadium as the city’s NFL team. Atlanta United FC has been a great football club. They have won the Eastern Conference, U.S. Open Cup, and Campeones Cup within their first 4 years in the new league.

How to Stream Atlanta Sports Live with ExpressVPN