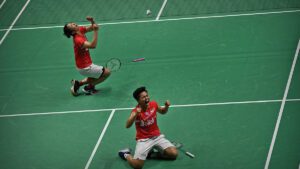 The Indonesia Masters is a yearly badminton tournament. It is part of the BWF World Tour. The competition consists of men’s and women’s singles and doubles competition. Many of the best players in the world will play. The tournament takes place at Istora Gelora Bung Karno in Jakarta, Indonesia. The venues has a wooden surface and has a capacity of over 7000. This tournament has a large amount of prize money and it can earn big points towards the season. The level of play is Super 500. Fans wanting to watch the Indonesia Masters can watch via BT sport in the United Kingdom. International fans may have a hard time viewing the event. Geo-restrictions prevent many broadcasters from streaming the event live. You can watch the 2023 Indonesia Masters worldwide with a VPN.

How to Use a VPN to Watch the Indonesia Masters

Here’s a quick guide for watching Indonesia Masters events with a VPN.

Why Do You Need a VPN to Watch BWF World Tour Events?

Before we get more in depth as to how to watch the BWF World Tour events with a VPN let us tell you more about the benefits of using a VPN for watching sports. Sports often have blackout restrictions for multiple reasons. One is an attempt to encourage more people to go to the game. Another is that the broadcast is only available in certain countries or regions. A VPN can help you out in these situations because it allows you to change your IP address. It does this by allowing you to choose a server location and assigning you an IP address from the region. If you choose a server in an area that the game is watchable, then you will be able to stream it. A VPN also hides your IP address and helps protect your privacy.

The 2023 Indonesia Masters are set to take place from January 24th to 29th. The prize money for the event is around 420,000 dollars. There are many pre seeded players. The athletes ranked for the first seeds include Viktor Acelsen, Akane Yamaguchi, Fajar Alfian and Muhammad Rian Ardianto, and Nami Matsuyama and Chiharu Shida. These competitors enter in the top half of the competition. Each of the tournaments have five rounds split. The first 3 consist of a bracket tournament of four groups. The winner of each of these sections go on to play in the semi-finals. Then the finals are the winners of the semi-finalists. The 2023 Indonesia Masters will feature some great badminton and the finals will take place on January 29th.

How to Watch Indonesia Masters with ExpressVPN