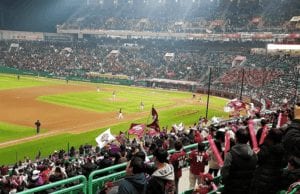 South Korean Baseball is one of the most popular events to watch. The Franchises are all relatively new and there are some really talented players and teams. They have 10 teams that play 144 games in a regular season. Each year ends with the KBO Korean Series. One of the most successful teams in the KBO League is the Kia Tigers. The newer league has grown in popularity internationally. Those who want to watch them can do so through KBS, MBC, SBS, SPOTV, and ESPN. However, some KBO games are blackout restricted. A VPN can help you unblock blackout restrictions. Join us as we teach you how to watch KBO games with a VPN.

How to Use a VPN to Watch Korean Baseball

Here’s a quick guide for watching Korean Baseball games with a VPN.

Baseball was originally brought over to South Korea during 1905. It has gone on to become one of the most popular games in the country. The KBO League was founded in 1982. It started as the Korea Professional Baseball with Six teams. It was also called Korea Baseball Championship for a while. The league has had more than 10 teams total competing over the years. The franchises are full of Korea’s brightest stars. The competition has brought great faces to the game like Yu-Hsien Chu, Kim Jae-hwan, and Yang Hyeon-jong.

Every team has one goal and that is to win the KBO Korean Series. The regular season has 144 games. Each team plays the others 16 times. The season starts in March and goes until October. During it, the teams will play in 9 inning games. There is a 12-inning limit in the regular season where the game will be marked as a tie. Every team is fighting for the best record as the place they end the season in gives them a huge advantage. The best five teams are the only ones that will qualify to play in the KBO post-season games. Talented players whose teams don’t make the playoffs can still look forward to getting into the KBO All-Star Game.

The KBO Series is the ending to the year. In the championship series, the higher you ranked in the regular season, the better chance the team will make it to the Korean Series. For example, the regular season winner automatically make it into the KBO Korean Series. The playoffs work in a step ladder system. There are five parts to the championship series. It starts with the KBO Wild Card Games. In this, the fourth place team plays against the fifth. In order to advance to the next part fourth place needs to win or tie one game. Meanwhile, fifth must win both. The winner qualifies for the KBO Semi-playoffs, a best of five series. There they will face the third seeded team. Then it advances to the KBO playoffs, a best of five series against the second place team. The final part of the post season is the KBO Korean Series. The Playoff winners and first seeded team will face off in a best of seven series. Any game in this process, after wild card, that ends in a tie will be replayed. The team that wins in the end becomes the Korean Series champion for that season.

Use a VPN to Bypass KBO Blackout Restrictions

Before we get more in depth as to how to watch KBO games with a VPN let us tell you more about the benefits of using a VPN for watching sports. Sports often have blackout restrictions for multiple reasons. One is an attempt to encourage more people to go to the game. Another is that the broadcast is only available in certain countries or regions. A VPN can help you out in these situations because it allows you to change your IP address. It does this by allowing you to choose a server location and assigning you an IP address from the region. If you choose a server in an area that the game is watchable, then you will be able to stream it. A VPN also hides your IP address and helps protect your privacy.

Korean Baseball teams have hundreds of games a year. They are available through KBS, MBC, SBS, SPOTV, and ESPN. While they offer access to out of market games, they often blackout in market games. Some also geo-block those who want to watch from other regions of the world. Connecting to a VPN will help you avoid the blackout restrictions to cheer on your favorite team all season long.

How to Watch Korean Baseball Games with ExpressVPN